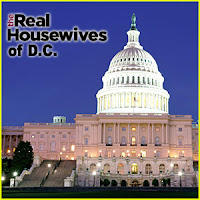 Another "Housewives" show will begin tonight on the Bravo network. "The Real Housewives of D.C." hasn't even premiered yet, and the new ladies are already causing controversy.
One of the women is Michaele Salahi who gained notoriety when she and her husband crashed the White House state dinner last November. Always the victim, Mrs. Salahi is now claiming abuse by Whoopi Goldberg on the set of "The View."

As seen on this video, Whoopi taps Salahi on her side in an apparent attempt to get her on the topic of the White House party crashing.
Backstage words were later exchanged, lawyers were involved, and now Bravo is sitting on ratings gold (well, that remains to be seen-tonight at 8p.m. CT).

The other "Housewives" are Stacie Scott Turner (a real estate broker), Catherine Ommanney (a British chick), Mary Schmidt Amons (has Kennedy ties), and Lynda Erkiletian (hates Salahi and should make for some drama!).
Posted by KeyRose at 12:51 PM