Access to an area of downtown Laredo has been hindered due to work being done on drainage pipes.  Retailers are now complaining that the work has taken longer than was promised.  In addition, the use of heavy equipment to dig up Flores Ave. has caused damage to some stores in the area and city officials are looking into the possibility of assisting the store owners with the cost of repairs. 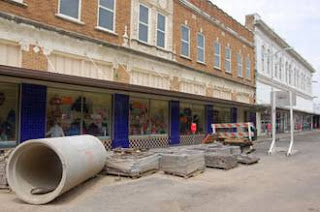 The work was contracted to a company out of Houston, MDA.  Mid November was the deadline for the repairs to be finished but El Manana reports that the new target has been set for October.  One delay that was noted was said to be caused by the recent flooding of the Rio Grande.

Store owners have been hurting because of the detours placed around the work site.  Sales have dropped dramatically forcing retailers to let go of personnel and even closing up their shops altogether.  One person was disappointed at not selling anything during the recent tax-free weekend.

2010 has not been a good year for a lot of people.  It may be good for one construction company in East Texas but not for local retailers already feeling the pinch of a bad economy, among other things.
One thing's for sure, Kirk Douglas couldn't film a scene in downtown Laredo the way things are right now.