Choices In The Barrio 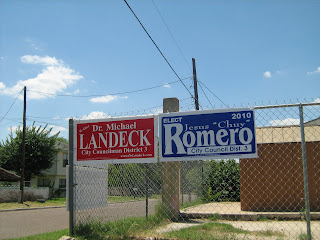 El Chacon is getting a touch of color with all the campaign signs going up.  City Councilman Michael Landeck is looking to keep his seat to represent central and southern Laredo.  But his choice of sign design is not really setting him apart from that of his opponent's.  His is red and his opponent's is blue;  I don't know if I should go with the red or the blue at this point. 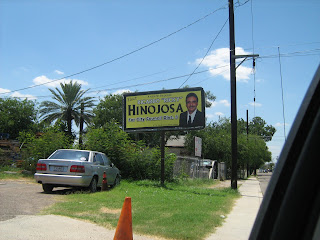 A third candidate looks like he's going bigger with his run.  Could it be that he wants it more?  I'm thinking of having a sit-down with all three candidates but don't know if it's logistically possible.  If I do meet with all three at the same time, you'll be the first to know.
Posted by KeyRose at 2:03 PM