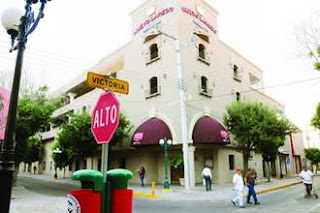 Mauricio Belloc of El Manana reports that one of Nuevo Laredo's former hotspots closed its doors August 1st.  He writes that a notice on the door states that it's a temporary closure.  But negotiations that occured between employees and management suggest it's permanent.

The same thing happened with Casa Marti, and Mexico Tipico:  their closings were not going to be permanent, but they never returned.
Downtown business representative Higinio Ibarra Murillo expressed his concern of not having the luxury of being able to relocate.  However, he notes that he stays because of his love for the city.

I never ventured into The Cadillac Bar, but know people who did.  For you, the city of Nvo Laredo, and its downtown, my condolences.
Posted by KeyRose at 9:53 AM