Saturdays Were Made For Composting 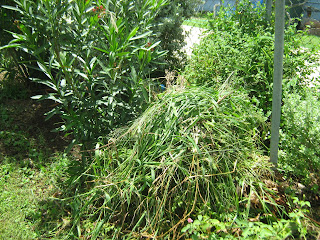 Cool, huh?  Anyway, just because it's Saturday doesn't mean there's nothing new to talk about.  Take, for instance, this little nugget in today's Laredo Times:

Published: Saturday, July 24, 2010 7:22 AM CDT
In addition to serving Webb County as a commissioner, Frank Sciaraffa will also teach criminal justice at United High School, beginning in the fall.

Sciaraffa says that his duties as commissioner will not be affected much by his new position.  Isn't the logo on the UISD board room wall something like, "for the sheeldren," or "shildren come first?"  Sciaraffa takes his Webb County position seriously but UISD must've hired him for some good reason.  Luck to him.


The LMT also reports that drug cartels in Mexico are passing off their vehicles like those of the military.

Crafty mudda fuddas.  Not only have they instilled fear on both sides of the border, they've managed to wreck both Laredo's and Nuevo Laredo's tourism and retail business.  Pro8news reports on the effect the violence in Nuevo Laredo is having on business in downtown Laredo.

What will the future hold for downtown Laredo?  As much as local officials try to revitalize the downtown area, it's never going to see better days.  Perhaps I'm being to quick to write off downtown, but it seems that when it starts to make tiny strides, something pops up and throws a monkey wrench in the whole process.


I realize that our neighbors across the river have it worse than we do, but for so much that people try to do to revive downtown, it seems like a losing effort.
Posted by KeyRose at 11:40 AM