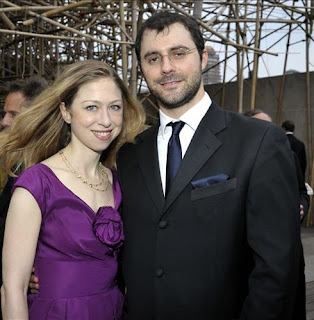 It's Chelsea Clinton's wedding day today. The only child of former President Bill Clinton and current U.S. Secretary Hillary Clinton will be married in upstate Rhinebeck, N.Y.
Her future husband is Marc Mezvinsky, an investment banker (He's rich!) and son of two former Democratic members of Congress. The couple have been friends since they were teenagers, and they attended the same college. They began dating in 2005. She's 30; he's 32.
The major details of the interfaith ceremony have been hush-hush up until now. Apparently Oprah might be there to say "Chelsea's marriiiiiiiiieeeeeeeeeddd!" Best wishes to the happy couple.
Posted by KeyRose at 8:47 AM