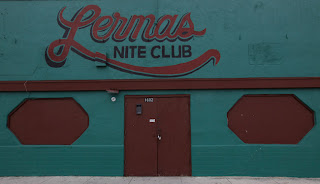 The Express-News shares with us the story of Lerma's Nite Club in San Antonio and its possible demolition.  The establishment was  recently found to have some structural problems when city officials paid a visit to the conjunto music mecca.

Club owner Gilbert Garcia was surprised by the unannounced inspection, stating that the city had never dropped in to assess his premises.  But now he's been given the responsibility of coming up with a plan, and the financing, to bring Lerma's up to code.  If it can't be done, the club will face the wrecking ball.

Jenn Alva, from the group Girl in a Coma, had this to say about the venue:

We have already lost the Mission Drive-In and La Gloria, and if we continue this process San Antonio will lose those memorable places which make our city what it is.....a city of unique culture.

Girl in a Coma recorded a video at Lerma's Nite Club in 2007.

Alva hits the nail on the head:  These landmarks truly make a city.  They offer a unique quality that allows for cities to differentiate each from one another.  I would only add that places like Lerma's connect us to the past, for they were the former stomping grounds of our elders.  Only theirs in Laredo had names like the Tumble Inn, and the Bordertown Drive-In.  Progress, alas, had the upper hand.  Luckily some of our cultural treasures are still intact and prosperous, such as the Casa Blanca Ballroom, Roli's, and El Gastronomico, while others, like El Azteca Theater, are on life support.

Lerma's has the luxury of having its history preserved, albeit it's in the form of a music video.  Others can't make that claim.  The Tumble Inn or the Play-Mor live on by word of mouth.  Their story may never be fully appreciated.

For some landmarks, unforeseen events might render them unsalvagable.  A fire or some act of God could destroy a piece of history; Or a wrecking crew could come in in the middle of the night and raze a structure to benefit someone's selfish need.  Whatever the case, bits of history, no matter how trivial they may seem, should be preserved.  Our kids will hopefully have proof that we were once hip, or at least, tried to be.