Geddy Lee and the hunks 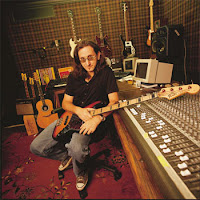 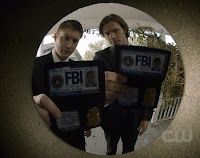 What a coincidence that during the week of Geddy Lee's birthday, TNT aired an episode of Supernatural in which he is mentioned. This was great since I love RUSH and the show.
The Halloween episode from the show's 4th season is titled "It's the Great Pumpkin, Sam Winchester," a nice nod to Charlie Brown.
On Supernatural the main characters Sam and Dean (pictured) often pose as FBI agents while they are on the hunt for demons and all things paranormal. Because Dean is a fan of classic rock & heavy metal, they use the names of rock musicians as their agent names. In this case they introduce themselves as Agent Geddy & Agent Lee. (See the clip here.) Other names they've used are Angus and Young, Page and Plant, Ted Nugent, and James Hetfield.
So happy belated birthday to Geddy Lee, who turned 57 on July 29th. Good luck on the rest of RUSH's tour (arriving in San Antonio, Texas on September 23rd!).
Posted by KeyRose at 10:37 PM