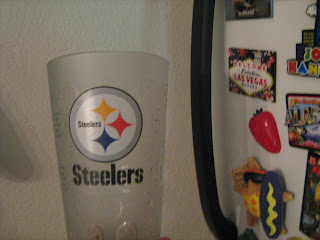 The Dallas Cowboys have made a splash with the opening of their training camp.  Honestly, I wouldn't expect anything different from "America's Team."

Bordertown Blues is taking some time off and I have to wonder if he's doing so to take part in the festivities.  At any rate, the football season is almost upon us and everybody must be on pins and needles waiting for the kickoff.

But on a sadder note, we here at LaSanbe found out that Bill Cowher's wife, Kaye, died Friday of skin cancer.  She was always by the coach's side when the Steelers suffered some tough losses.  Kaye Cowher was 54.  Whether the former coach will continue his duties as commentator for CBS Sports remains to be seen.  But personally I don't think he's going to go back to coaching anytime soon.

Our thoughts are with him and his family.
Posted by KeyRose at 10:03 AM