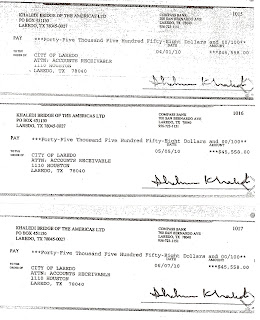 Earlier this month I went over some issues regarding El Portal --  the city's property next to Bridge 1 that's currently leased to the Khaledis.  I managed to get some information from several sources, but was waiting on proof of the actual rent payments.  A city employee at the legal department emailed me some copies of the checks that the city received from the Khaledi group.

Initially I got three check copies.  I thought it was the initial batch and the rest (first payment was made in April 2009) would be forthcoming.  But I had to email them again to remind them to send the rest  but I never got a response.  I finally called and the lady told me that this was all they had.

I was dumbstruck.  I asked her if this has been all they've paid and she didn't really offer up a response.  She offered to send me a list of the payments received but I had something to that effect already. 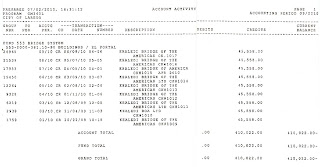 I don't know about this.  They can send me a detailed statement showing that payments were allegedly made but they don't have copies of the actual checks.  Have they (Khaledis) actually been making payments?  I can't tell.