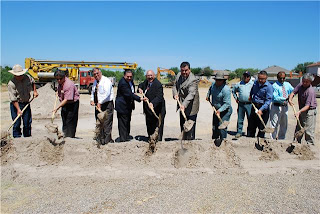 Earlier today, District I Council Member Mike Garza, joined by Mayor Raul G. Salinas, various City of Laredo directors and staff and representatives from Crane Engineering Corp. and Whitestone Construction, Ltd., officially broke ground on the Merida Drive Extension Project, hoping to alleviate some of the traffic congestion problems for people who work and live in the Los Presidentes and Independence Hills subdivisions, as well as for United South High School and the future Independence Hills Regional Park. The project will connect Merida Drive to provide a north-south collector to Bob Bullock Loop 20. The total cost of the project is over $2.4 million with a construction calendar timeline of 220 days, approximately 10 months. Funding is available in the 2009 Certificate of Obligation bonds and approximately 25% from federal funds from the U.S. Department of Housing and Urban Development.

Mayor Salinas uses that same shovel to protect us against terrorists in this post-911 world.

Wait just a minute.  We are getting breaking news into the LaSanbe world news headquarters that the shovels were decorated with bright colorful ribbons.  However they melted off due to the intense heat and high concentration of smugness present.

We will have more from this town hall meeting photo op as details become available.
Posted by KeyRose at 1:20 PM