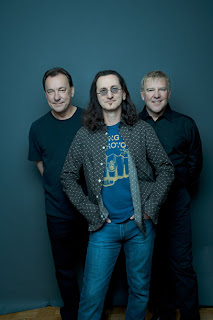 The Canadian rock trio RUSH was honored with a star on the Hollywood Walk of Fame last Friday. The members of the band are Geddy Lee (vocals, bass guitar, keyboards), Alex Lifeson (lead guitar), and Neil Peart (drums, percussion). These three have been together since 1974, when Peart replaced the original drummer John Rutsey.

They are the only band I can think of that are still together after so many years, still recording new music (their 19th studio album Clockwork Angels is set to be released early 2011), and still touring...regularly. They don't even have opening acts; it's simply "An Evening with RUSH"!

It's about time they get some recognition here in the U.S. They have been shown little love by critics here even though they keep selling out shows on their tours, have a huge worldwide fan base, and are 3rd behind only the Beatles and Rolling Stones with most consecutive platinum and gold albums.

The band was introduced to American audiences through Cleveland radio station WMMS-FM back in the 70's.  Ironically the centerpiece of Cleveland, the Rock and Roll Hall of Fame, now won't have anything to do with RUSH.  For years fans have been waiting for them to get inducted, but their petitions and requests have always fallen on deaf ears. Considering Jan Wenner isn't a fan of RUSH and only what he and a few others think is cool gets the green light, we may never see them get the honor they certainly deserve.

The award-winning documentary "RUSH: Beyond The Lighted Stage" comes out on DVD Tuesday, June 29th. That same day RUSH will be in Albuquerque kicking off their new tour, which will feature their very popular album Moving Pictures in its entirety! The tour makes its way to Texas in September. Can't wait!