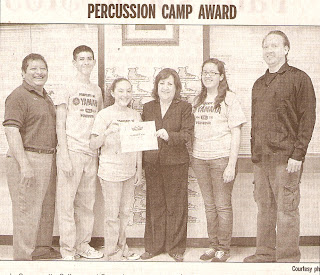 The LMT featured a picture of some Nixon H.S. drummers accepting a gift certificate worth $500.  It was awarded to them by Remo and L.C.C. for having the most members attend the recent drum camp at the Ft. McIntosh campus.

With that money, they'll be able to buy new drum heads.  Sweet.

What's not so sweet is that the Nixon drumline hasn't had a drum instructor for some time now.  Without one, somebody within the line has to step up to lead the group.

A drum instructor not only can devote his/her time to the drummers but can also make them aware of events like this.  I'm going to go out on a limb here and say that Mr. Luna, Nixon band director (far left), had nothing to do with the drum camp.  He just showed up for the subsequent photo op.

Kudos to Mr. Matthew Adams (far right) for hosting these camps.  And an honorable mention as well for Mr. Bobby Castro from Cigarroa.  He put together an indoor drumline in which these drummers have participated in.  Having someone to give them direction and improve their drum skills makes a ton of difference.  Mr. Luna should thank his lucky stars that he has these two individuals sharpening his students' skills.  The void remains at Nixon but help and attention is not too far off.
Posted by KeyRose at 9:07 PM