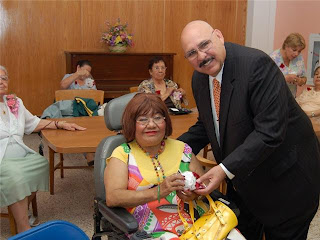 Salinas' intentions are good, but I don't believe he has the business acumen necessary to forge a more prosperous Laredo.

Rutland goes on to say that Salinas doesn't give specifics when it comes to funding specific projects.

Salinas' campaign slogan might be, "Still, The Best Man," but his opponents will surely bring up several things this Fall that haven't exactly panned out.  It'll be interesting to see what exactly he runs on, and whether or not he'll grace us with some numbers.

I can tell you right now that he'll bring up the worn-out line about not raising taxes.  The figure I want to see is the count of how many photo ops he's had in the past four years.
Posted by KeyRose at 8:12 AM