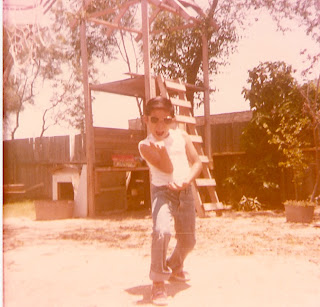 Trees in the barrio are sometimes hard to come by.  And in most cases, the trees that are present are located in a spot that doesn't lend itself to tree house construction.  As a result, we sometimes have to improvise.

I found this picture the other day that dates to around 1980.  In the background you can see our version of a tree house.  It was near a tree, so to us, it was referred to as such.

I have no idea who constructed it and whether or not it was ever completed.  We were probably just as happy with it just as it appears.  This was our tower.  There were probably many like it but this one was ours.

I wonder if we tried to replicate the towers that stood at Lake Casa Blanca's kiddie park.  Whatever the case, it was our place to pass the time.  And of course, we could check in on our neighbors to the South.  Their house was rectangular, made of brick, and had a flat roof.  The place was old.  We used to call it the Alamo.