The Race For Mayor Begins 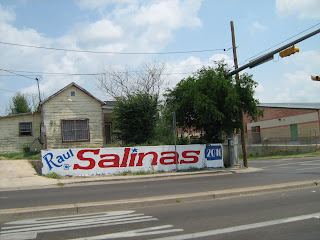 I saw the first sign for the mayoral race at the corner of Park and Springfield.  As it stands right now, Gene Belmares, Joe Valdez Jr. and incumbent Raul Salinas have officially announced their candidacy for the office.

A blogging colleague said that two other people are also jumping into the race.  They are familiar faces.  We'll keep an eye out for their campaign kickoffs.  The election is just under six months away.

As a sitting politician, you have to get a jump on the competition.  And if you can do it by horse, all the better.