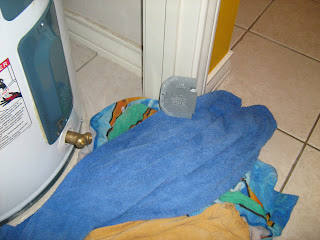 Yesterday my 40-gallon electric water heater was replaced by a new one because we saw water collecting underneath the appliance.  After the heater was replaced, water was still seeping but we noticed that it was coming from the doorway's molding (metal plate on blue towel).

The plumber thought the wood had absorbed some of the water and now it was sweating back out.  That made sense, because the door was not closing as easily as before.

Today we still have water coming from the molding and it's quite a lot.  We're switching out towels every four hours.  The plumber thinks there could be a leak under the tile and that it could get complicated to find the leak.

Has anyone had a problem like this?
Posted by KeyRose at 11:05 AM