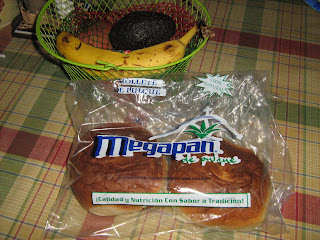 Growing up in one of Laredo's barrios, I was exposed to many things popular with our culture.  But only recently had I heard of pulque.  That has a lot to do, I guess, with being raised by three wonderful women.  Wine coolers or other spirits were present during holidays but that was it.

At a family gathering at my suegra's house this weekend, my brother-in-law brought in some Megapan de Pulque.  I didn't ask him where he got it but he mentioned that it's sometimes made with river water.  I didn't taste it, not with what I've read about pulque.  Here's a passage from James Garza's The Imagined Underworld:

Patrons could order pulque either puro (plain) or in a fruit-flavored variety, known as a curado.  The liquid resembled a mildy-white substance, with qualities ranging from slimy to acrid to foul and with a smell described as resembling slightly putrid meat.  Often it was adulterated with sewer water, and it commonly produced stomach and intestinal problems.  Pulque boasted a low alcoholic content, so customers had to drink large amounts to feel any effiects.

(Emphasis is mine)
Having read that, I wasn't so eager to try any pan de pulque.  I'll get to it eventually but will make sure I have some Pepto close by.
This, however, is a perfect example of how our culture is hiding in plain sight and most of us overlook it.  Practices of old are slowly fading from our consciousness.  Our children will probably never know the story of La Llorona, be cured with an egg, or swept for good luck with a branch from a pirul.

I was raised on homemade flour tortillas, but we also downed a lot of Happy Meals.  My son, sadly, has only tasted the tortillas served up at Taco Palenque.  Things have certainly changed.  Luckily he's still young;  We can still catch up on old remedies and recipes.  The pulque, however, will have to remain a topic of discussion and not of consumption.
Posted by KeyRose at 7:48 AM