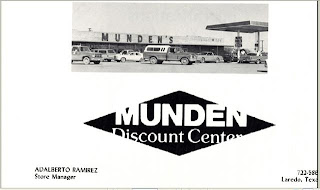 Bordertown Blues posted a picture of Western Auto and I inquired about any Munden's pics.

I asked and I have recieved.  Thank you, reader, for this submission.

Munden's, Perry's, and Western Auto were the places we shopped at before Wal-Mart came in and ruined everything.  This building (pictured) is still standing and houses many commercial sites.

November 3, 2015 UPDATE:  Recently I interviewed Sammy "The House" Ramirez for a podcast.  I was aware of his career in local radio, but never got to know him on a personal level.  He floored me when he mentioned that his father managed the Munden Discount Center on Corpus Christi St.  The Ramirez family actually moved back to Laredo in 1979 so the patriarch could do just that.  The senior Ramirez became well known in the community, affectionately known to some as "El Poofy."

Sammy blazed his own trail, but people still picked up on the uncanny resemblance to his father.

My mother took us to Munden's many a time; so much so that I can't help but remember the store fondly.  The faces I don't recall, but it's interesting to think that I could've crossed paths with a young Sammy "The House" in my school-age years.  Sammy Ramirez is present throughout our community.  I mostly keep up with him through social media outlets, but I know I'll run into him again at some local event.  And every time we have an exchange, I'll be thinking about Munden's, his family and their contribution to Laredo.
Posted by KeyRose at 10:20 AM