Even before watching Bret Michaels on Celebrity Apprentice, I've always wondered about his fake-looking hair and his constant use of bandanas, with or without cowboy hats.

His recent medical drama has caused even more speculation about the balding question: is he or isn't he? Even in the hospital, hooked up to wires and IV's, HE'S WEARING A BANDANA!!! This is too much.

I'm very glad to hear that Bret is doing much better and is expected to make a full recovery, but this is beyond ridiculous. And where is his hospital gown in this pic? And I don't see any hair!?!

[Granted, his former/current? girlfriend and mother of his 2 daughters is the one credited for taking the picture. So maybe she took off his gown, and put on his trademark bandana before taking the picture. BUT he's in there due to a BRAIN hemorrhage! There needs to be access to his head! I'm at a loss.] 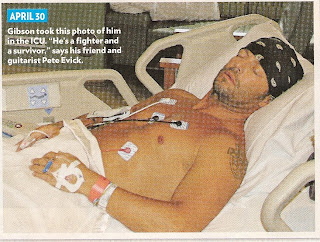 Photo courtesy of People Magazine
Posted by KeyRose at 10:45 PM