Corporate America knows the contribution that Mexican-Americans make to this country.  They have certainly taken notice of all the people who have been attending exhibition games where Mexico's soccer team appears.
Mexico's trips to the United States, including Friday night's sold-out exhibition against Ecuador at the new 75,000-seat stadium in the Meadowlands in New Jersey, are big business.
Even in the NBA, teams and fans are making it known that the Latino population is not to be taken for granted.  In game two against the San Antonio Spurs, the Phoenix Suns used their "Los Suns" jerseys, partly as a marketing scheme but also as a rebuke to Arizona's recently-passed immigration law. 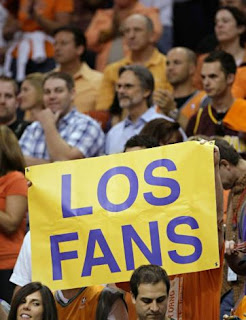 It goes to show that Latinos are a big part of this country.  Xenophobes should think twice about messing with Mexicans corporate America.
(photo courtesy of Matt York - AP)
Posted by KeyRose at 8:48 AM