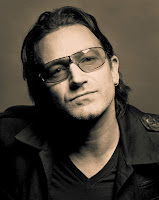 I know it's Mother's Day in Mexico today, but more significantly (for me anyway), it's Bono's 50th birthday! Woooohoooo!

The U2 frontman, whose birth name is Paul Hewson, is still going strong. The band is relaunching their tour next month, bringing back "the claw" to several North American cities and then on to Europe. The DVD of last year's landmark U2 concert at the Rose Bowl arrives in stores in June.

Bono can also be heard narrating one of the FIFA World Cup commercials (Song: "Magnificent"), and several other of these TV spots use different U2 songs. (See the "Where the Streets Have No Name" clip below.)

Happy Birthday Bono! You're voice and the music you make with U2 have long been an inspiration to me. You were a mere 27 when The Joshua Tree was released, and I've been along for the ride ever since. :)