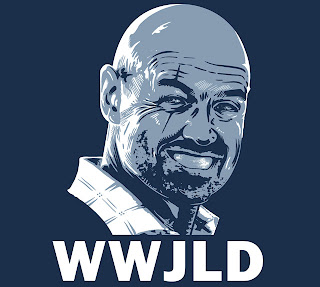 Tonight was the special LOST event at theaters across North America, Times Talks Live: LOST. It was a pleasure to watch. It was kinda like those extras on your DVD's that you may or may not watch.

But this was a LIVE Q&A session with a NYTimes reporter which also included some audience questions. And there were some surprise guests **** SPOILER ALERT*** (lol!) Ben and Hurley appeared on stage along with the show's writers/producers Damon Lindelof and Carlton Cuse. There were some clips shown and even one from Sunday night's big finale, which the audience was informed will have Star Wars-esque stuff in the beginning!!! Cannot wait!

This photo I've included depicts a major character on the show: John Locke. It comes from the pilot episode where Locke is eating a slice of orange after surviving his plane's crash landing on the island. What would he do? Better yet, WHAT HAS HE DONE!?!

I'm still on Team Jacob on this one. Live together, die alone.
Posted by KeyRose at 8:29 PM