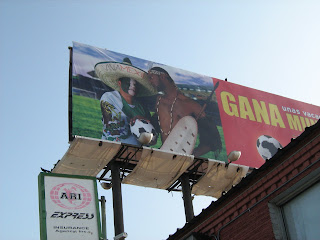 Arizonans are about to get a crash course in racial profiling, what with the new immigration law taking effect.  Things are not going to be nice.

Down here in our neck of the woods, we get our stereotypes served up in the form of marketing.  Take this Pocket billboard, for instance.  They've popped up around Laredo but I wonder if people have really given them a second look.

The ad has a World Cup theme.  You have a Mexican soccer fan wearing a sombrero.  That in itself could be viewed differently.  Hell, I'd wear one just because of the (shade) coverage it provides.  But it's not to say that every person in Mexico wears one.  The model could've been posed with a simple cap or something else.

The one that makes me cringe a little more, however, is the other person, the one that's half-naked and carrying a spear.  The host nation for the soccer event is South Africa, but I really don't think that this portrayal is all that kosher.

How many people did this idea go through, and are those people still employed?  Let me know if you've seen this ad where you live.
Posted by KeyRose at 5:02 PM