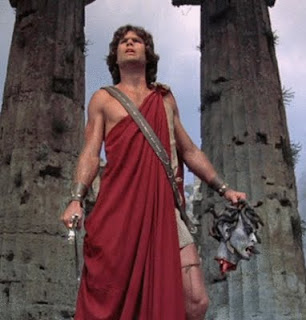 The re-make of "Clash of the Titans" opened today in theaters. From viewing the previews I see that it has tons of special effects, lots of action, and even a metal soundtrack! (Actually, I'm sure the shredding guitar was just used to make the movie trailer cooler.)

I'm not a fan of the new wave of 3-D movies being offered up nowadays, though. If I do see the re-make, it'll be the (gasp) regular, ol' 2-D version. I read that the 3-D effects on this movie were added on after the fact, so that should make them a little less special anyway. BUT this movie does have Liam Neeson as Zeus and Ralph Fiennes as Hades (a character I don't remember from the original), alongside Avatar's main man Sam Worthington. All good.

The original 1981 movie starring Harry Hamlin (pictured) is a major childhood memory of mine. The "special" effects were so poor on that movie, but you couldn't help yourself from watching it over and over. I do remember being freaked out by the three blind women, the hairy demon-looking guy, and of course, by Medusa (severed head, pictured). If any movie had potential for being re-made, Clash of the Titans certainly deserved it.
Update: Big Surprise. Clash of the Titans was the weekend's #1 movie.
Posted by KeyRose at 3:49 PM