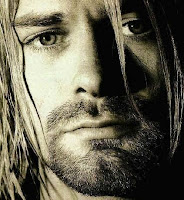 This week marks sixteen years since Nirvana frontman Kurt Cobain died. His body was found April 8, 1994 in his Seattle home, but it was estimated that he had been dead for several days. His death certificate states the date of his suicide as April 5th.  He was 27.

Though his life came to a sad end, Kurt left a legacy of great music. You can hear Nirvana's music today, and it still sounds so fresh. At the time I never called myself a Nirvana fan, but I was curious about them since I first saw their breakthrough video for "Smells Like Teen Spirit" in the Fall of 1991.

I was interested in Nirvana from then on, and I was lucky enough to have seen them live in a Dallas concert in December 1993. Looking back on that time, it was just another concert to go to. Little did I know I was witnessing a rock legend that would soon be gone.

"I must have died alone, a long long time ago." Kurt sang these lyrics during their MTV Unplugged performance of "The Man Who Sold the World," an eerie but beautiful David Bowie song. I remember MTV aired this repeatedly after Kurt died. In retrospect the flower and candle decor that Cobain wanted for the stage looks like that of a funeral.

This song remains one of my favorites on the Unplugged show, which was recorded live only a few months before Cobain's death.