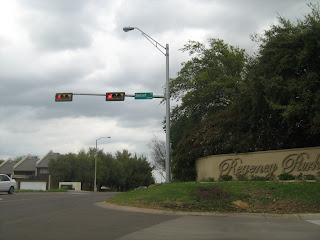 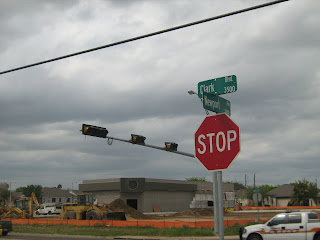 It came to my attention that some intersections are getting preferential treatment over one specific roadway. Case in point: the lights at the intersection of Clark and Newport (near the Target) were installed in October 2009 with the promise of being activated within a month. Here we are five months later and zip. Nada. Naranjas, as they say in Newport.

But look over to the Regency Park entrance (pictured) and they have a working traffic light. Interesting. Another traffic light near Alexander H.S. has also been activated lickity split.

Looks like North Laredo gets what it wants, and those on points South have to wait a little longer. Let's call this the Gene Belmares phenomenon. (Councilman Belmares represents the North)

If anyone's listening, please turn on the lights.

Wait, this just in from the City of Laredo:

The lack of love for Newport and Clark continues.
Posted by KeyRose at 4:51 PM