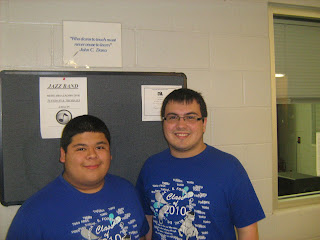 Cigarroa High School Seniors Jesus and Leo both made the All-State Band (4A Category) and are well on their way to furthering their musical education.

Jesus (Clarinetist, standing left) commented that the preparation was really tough in order to get to this level. One has to really prepare "to stand out" in the crowded woodwind competition.
Jesus qualified at the area level as a sophomore and a junior. He said that the motivation from his instructors, as well as private instruction from a college professor, was a key factor in realizing his goal.

2010 marks the second time that Leo (Oboe player) captures All-State honors. LaSanbe featured him last year as well. He stated that there was an added pressure this time around to repeat his previous task. Like Jesus, Leo also took advantage of several private lessons from a valley-based instructor. Throughout the many tryouts, he never really relaxed, or let his guard down, until he knew he had made it to the end.

Both students plan to attend Texas State University and major in Music Education. LaSanbe congratulates both bandsters and wishes them continued success.
Posted by KeyRose at 5:25 AM