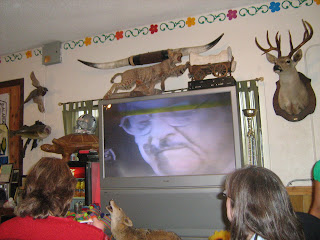 I'll try to capture some video of the event. If some attendees are up to it, great; if not it'll be just me. Happy Holidays.

UPDATE (14:45): The second LaSanbe meet-up is in the books and it was a success. For a while, I thought nobody was going to show up, but I'm thankful for everybody who made it out to Candela's. We had slightly more people than last time and some new faces appeared.

Thank you all and we'll do it again soon. (On the t.v. screen is J.C. Martin, former mayor of Laredo, in a story that Bill Moyers produced for CBS News back in 1979)