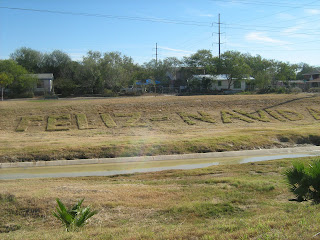 I was driving around my old neighborhood Saturday and saw a guy putting a weed eater to good use.

I went over to ask him if he worked for the City of Laredo, or was hired by anyone to do this. He told me that he was doing this just for the hell of it.

His name is Luis Vega.

He said he did this before but city staff erased his work by doing their routine mowing. I was amazed when he told me that he did this freehand, so to speak.

Some people spread their message with cardboard; Luis does it with an edger.
Posted by KeyRose at 7:42 PM